All begin with player using a wooden or plastic rack to set up the balls for play. The balls are placed within the rack tightly together, and then the rack is removed. If any of the balls are moved, the balls are re-racked until they hold their tight form after removing the rack. The other player then begins the game by hitting the balls with a cue ball, known as breaking the rack.

How do we do that?

Slide the entire rack of balls forward, toward the centre of the table while standing at the end of the table opposite the cue ball. Place your fingers into the rear portion of the rack, forcing all of the balls forward into a tight-knit group. Pull the rack back toward the spot on the table, stopping when the head ball is centred over the spot. All of the balls should be firmly touching one another with no gaps in between them Lift the rack gently off the balls, watching closely to see if any balls move or if there are any gaps between them. If any movement or imperfections are noticeable, replace the rack over the balls and repeat the previous step. 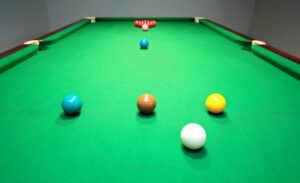 Snooker may be played by two or more players, either independently or as sides. The game can be summarized as follows: 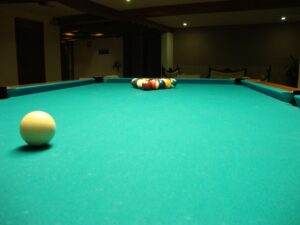 Eight ball is a call shot game played with a cue ball and fifteen object balls, 1 through 15. One player must pocket balls of the group numbered 1 to 7 (solid colours), while the other player has 9 through 15 (stripes) the player pocketing his group first and then legally pocketing the 8-ball wins the game.

The game is the most frequently played discipline of pool, and is often thought of as synonymous with “pool”. The game has numerous variations, mostly regional. It is the second most played professional pool game, after nine-ball, and for the last several decades ahead of straight pool.

Racking the balls on the pool table for 8 ball game. 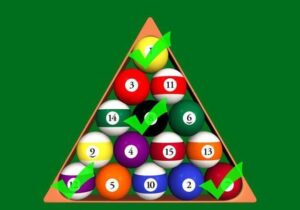 The balls are racked in a triangle at the foot of the table with the 8-Ball in the centre of the triangle, the first ball of the rack on the foot spot, a stripe ball in one corner of the rack and a solid ball in the other corner.

Place the 1 ball (the solid yellow ball) at the head of the rack, pointing toward the centre of the table, if you’re playing 8-ball. The next ball on either side, slightly behind the 1, should both be striped balls, followed by the 8-ball directly behind the two striped balls. Except in competition games, the remaining balls can be placed into the rack in any order. For competition games, however, the balls should alternate around the perimeter in a solid-stripe-solid-stripe manner

Nine Ball is played with nine object balls numbered one through nine and a cue ball. On each shot the first ball the cue ball contacts must be the lowest-numbered ball on the table, but the balls need not be pocketed in order. If a player pockets any ball on a legal shot, he remains at the table for another shot, and continues until he misses, fouls, or wins the game by pocketing the 9-ball. After a miss, the incoming player must shoot from the position left by the previous player, but after any foul the incoming player may start with the cue ball anywhere on the table. Players are not required to call a shot. A match ends when one of the players has won the required number of games.

Racking the balls on the pool table for 9 ball game 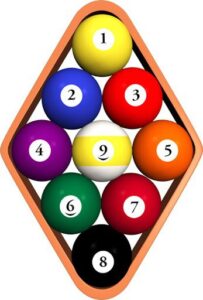 Diamond Shaped -The object balls are racked in a diamond shape, with the one ball at the top of the diamond and on the foot spot, the nine ball in the centre of the diamond, and the other balls in random order, racked as tightly as possible. The game begins with cue ball in hand behind the head string.